This Union of Concerned Scientists book is an essential resource for those who are committed to a better, healthier environment. It provides many excellent tips for significantly reducing individual, household and workplace energy costs. View Jeff Deyette's June, 2012 interview Cooler, Smarteron SftPublic's Contemporary Science Issues and Innovations program, and his return appearance on that program November 10, 2015 to discuss Renewable Energy Progress --Despite Resistance from the Fossil Fuel Industry 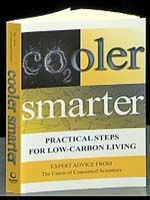 Mr. Deyette has been quoted widely, including by The Charleston Gazette, Mother Jones, The Philadelphia Inquirer, St. Louis Post-Dispatch, Slate, and Toronto Star, and has appeared as a guest on numerous radio and television programs.