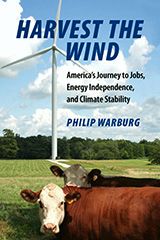 Philip Warburg appeared on SftPublic's Contemporary Science Issues and Innovations program on June 28, 2016 to discuss The Push for Renewable Energy and the importance of public engagement in the effort to implement renewable energy --now. He describes his own development as an activist and author, and --in his books-- the perspectives of all sorts of people as they confront climate change and modern energy needs.