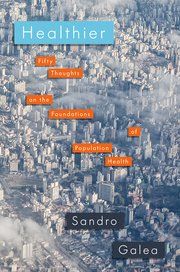 In his September 19, 2017 video for Science for the Public's Working Science series (Public Health: A Deeper Perspective](http://scienceforthepublic.org/medical-research/public-health-a-deeper-perspective), Dr. Galea discusses his new book Healthier: Fifty Thoughts on the Foundation of Population Health and his distinguished work in public health. His comprehensive perspective of the health of populations is especially important in this era of widespread crisis affecting many populations. Crises such as environmental disasters, famine, epidemics, and displacement affect populations both physically and psychologically. Dr. Galea's focus on complexity --the connections between physical, environmental and physical factors in health make his book a "must read" resource for understanding today's health issues.

Dr. Galea was named one of TIME magazine's epidemiology innovators and has been listed by Thomson Reuters as one of the "World's Most Influential Scientific Minds" for the Social Sciences. He is past-president of the Society for Epidemiologic Research and an elected member of the National Academy of Medicine and of the American Epidemiological Society. Dr Galea has received several lifetime achievement awards for this research, including the Rema Lapouse Award from the American Public Health Association and the Robert S Laufer Award from the International Society for Traumatic Stress. Prior to his academic career in public health, Dr. Galea practiced emergency medicine in Canada and served in Somalia with Doctors Without Borders.