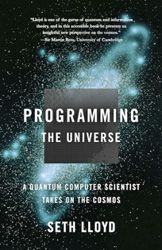 Dr. Lloyd was our guest on Contemporary Science Issues and Innovations December 01, 2015: Quantum Computing, Quantum Biology. He discussed the progress of quantum computing and his pioneering role in the field, his concept of the universe as a quantum computer, and the increasing interest in quantum mechanisms in biological systems such as photosynthesis. And, of course, his book Programming the Universe: A Quantum Computer Scientist Takes on the Cosmos (Knopf, 2006) was very much a part of the discussion.