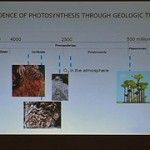 In 2010, when Alexander P.P. Petroff was a doctoral student in the Department of Earth, Atmospheric, and Planetary Science at the Massachusetts Institute of Technology. He paired up with Professor Tanja Bosak of the same department to present a lecture on The Evolution of Photosynthesis.

Alex Petroff's research focuses on how the complex and intricate patterns in the natural world arise from simple physical laws. He has applied his background geophysics to the reconstruction of ancient biological developments such as the earliest forms of photosynthesis among other things.

Dr. Petroff is originally from Alabama. He holds degrees in Mathematics and Physics from Carleton College (Northfield, MN). He received his PhD from MIT in 2011 and became a John C. Whitehead Fellow at the Center for Studies in Physics and Biology, Rockefeller University.