Dr. Sonnenschein and Dr. Soto discussed The Long-Term Health Threat of Endocrine Disruptors on SftPublic's Contemporary Science program in May, 2012.

Carlos Sonnenschein, M.D. is a Professor in the Department of Anatomy and Cellular Biology at Tufts University School of Medicine. The Sonnenschein Lab's research concentration is on on three interrelated areas:

Dr. Sonnenschein has collaborated for several decades with Professor Ana M. Soto, M.D., his colleague at the Tufts University Medical School. Part of that collaboration led to the early discovery of the pernicious effect of endocrine disruptors (they coined the term). For their exceptional contribution to science through this work, Drs. Sonnenschein and Soto they received the 2012 Jacob Heskel Gabbey Award (with Dr. Patricia Hunt). 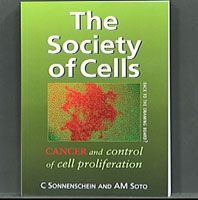 Dr. Sonnenschein also co-authored with Dr. Soto The Society of Cells (Bios-Springer-Verlag, 1999) in which they proposed, based on exhaustive analysis of cancer research, that the so-called sporadic cancers (95 percent of all clinical cases) represent diseases specifically anchored at the tissue level of biological organization (tissue organization field theory, TOFT).

Dr. Sonnenschein has published widely and has presented seminars all over the world.