Professor Chen has given two presentations for Science for the Public on the potential of solar thermoelectric generators (STEGs) as an alternative energy resource: Solar Thermoelectric Alternative Energy in 2011; and Solar Energy the Third Way in 2012.

Gang Chen, PhD is the Carl Richard Soderberg Professor of Power Engineering at Massachusetts Institute of Technology. He obtained his Ph.D. from UC Berkeley in 1993 working under then Chancellor Chang-Lin Tien. He was a faculty member at Duke University (1993-1997) and then UCLA (1997-2001), before joining MIT in 2001. 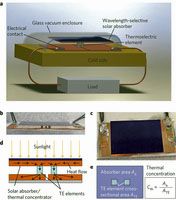 The Chen Lab is a leading force in the field of nanoscale energy. He serves as the director of Solid-State Solar-Thermal Energy Conversion Center (STECC), a DOE Energy Frontier Research Center. He has published extensively in the area of nanoscale energy transport and conversion and nanoscale heat transfer, and co-founded GMZ Energy.

Dr. Chen has received many awards, among them the National Science Foundation Young Investigator Award, the American Society of Mechanical Engineers Heat Transfer Memorial Award, the R&D100 Award, and MIT's McDonald Award for Excellence in Mentoring and Advising. Dr. Chen is a Fellow of the Amer Assoc for the Advancement of Science and several other prestigious science organizations, the Chair of the American Society of Mechanical Engineers, and serves as editor for several professional publications.