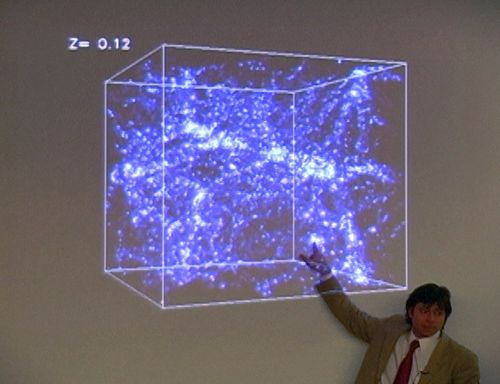 Max Tegmark is a Professor of Physics at the Massachusetts Institute of Technology. Dr. Tegmark is famous for his mathematical investigations of the cosmos and he is probably especially famous for his work on multi-level universes. He's also well known for his association with the late great physicist John Wheeler.

He has won numerous awards, including a shared first prize in Science magazine's "Breakthrough of the Year: 2003." In addition to a prodigious output of academic articles, Professor Tegmark has written many articles for the general public. For this he deserves much credit; it takes great skill to translate for the nonspecialist the very abstract concepts associated with the nature of the universe and reality.

Originally from Sweden, Dr. Tegmark received his PhD in physics from the University of Berkeley in 1994. After working as a Research Associate at the Max-Planck-Institut für Physik in Munich, he became a Hubble Fellow and member of the Institute for Advanced Study at Princeton. Before MIT lured him to Cambridge in 2004 he was a tenured professor at the University of Pennsylvania.

You can find a list of his articles that have appeared in Scientific American, New Scientist and other magazines on his MIT website and on our Science for the Public website as well. He has also been featured in documentaries about the universe such as the BBC's Horizon series and in documentary Parallel Worlds, Parallel Lives about the famous physicist, Hugh Everett.