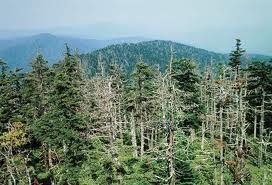 Sulphur dioxide, carbon dioxide and nitrogen oxides are the main chemical compounds emitted from smokestacks, vehicles, and volcanoes. Once in the atmosphere, these compounds cycle back to earth through precipitation or as particulate dust. Some two-thirds of the pollutants in acid rain come from the smokestacks of electric power plants.

Air currents carry these molecules over huge areas, so that the components of acid rain produced in one nation are often absorbed in rain clouds around the globe. Because of its corrosive effects, this kind of precipitation is called "acid" rain. Wherever it falls, it contaminates the air, water, and plants and animal life. The destruction can be seen in agricultural areas, in forests, and in lakes and rivers. In all these cases entire ecological systems are disrupted. Acid rain also damages metal and stone, and the corrosion can be seen in monuments, statues, bridges and other structures.

Even in the nineteenth century scientists understood acid rain; but governments and industrialists believed that the pollutants would eventually dissipate on their own. However, as motor vehicles, trains and planes added to the pollution from industry in the twentieth century, it became clear that acid rain was affecting health and environment on a huge scale.

Finally, toward the end of the late twentieth century, environmental activists were able to influence public opinion and press for regulations. By that time it was no longer possible for polluters and their allies to oppose regulations or to ridicule the scientists and activists who demanded action. Although industry did resist, some regulations were established in the United States. Many European nations created stringent regulations to reduce acid rain. Today it is well understood by the scientific community that acid rain requires international regulation, as the bulk of the toxins are produced by industrial nations.