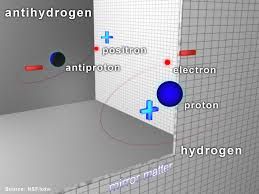 In his famous 1928 equation Paul Dirac, one of the greatest theoretical physicists of all time, predicted the existence of antimatter: for every particle there must be an opposite. For example, the antiparticle for the electron with its negative charge, would be a positron with positive charge.

The equation's prediction surprised Dirac as well as others in the brilliant group of physicists who introduced the revolutionary quantum theory in the 1920s. Dirac, Bohr, Heisenberg and Pauli all doubted the possibility of antimatter. The concept was not accepted until 1932 when physicist Carl Anderson at the California Institute of Technology accidentally discovered the positron --the antimatter partner of the electron-- in his gamma ray data. This was irrefutable proof of the Dirac's 1928 equation.

The importance of antimatter is not limited to understanding of matter and the universe. There is great interest in the pure energy produced by particle-antiparticle annihilation, and scientists are trying to find a way to produce this energy on a larger scale than is presently possible. Antimatter has had a more immediate application in medical technologies such as Positron Emission Technology (PET scan) and Magnetic Resonance Imaging (MRI).