The "tree of life" depicting the classification of organisms has been modified a number of times as scientists have learned more about evolution and genomes. Generally, evidence for a needed category change has been sufficient cause for re-classifying an organism. However, one of the most fundamental proposed changes was resisted for more than two decades, despite abundant evidence. 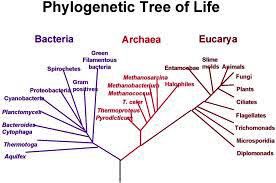 The base of the "tree of life" consists of the fundamental groups of single-cell organisms, the ancestors of all life on Earth. From the time of Darwin, the single-cell groups were divided into just two "kingdoms" or "domains": the bacteria (or prokaryotes), which lack a nucleus; and the eukaryotes, which contain a nucleus.

One group of cells originally classified as bacteria, was the archaea. This group is generally considered the most ancient of all cell types and has some unusual features. For example, the cell membranes of archaea are very distinct from those of bacteria. Also, archaea metabolism is unique; these cells thrive in extreme chemical and temperature conditions that would be impossible for either bacteria or eukaryotes.

In the 1970s, the Carl Woese, one of the most distinguished molecular biologists in the world, made a very careful comparison of archaea and bacteria and, noting the great differences, announced that archaea represented a third domain and that the base of the tree of life should be re-drawn to represent this distinction.

The biological community rejected Woese's claim outright, and for years archaea continued to be classified with bacteria/prokaryotes. Woese was surprised and very disappointed by this rejection in the face of such overwhelming evidence.

Things changed at last in 1998. In that year the first complete genome sequence of an archaea representative, the Methanoccus, was produced, Woese's claim was finally indisputable. Since then, evolutionary "trees" have been re-drawn, so that the base shows three domains at last: the archaea, the bacteria, and the eukaryotes.