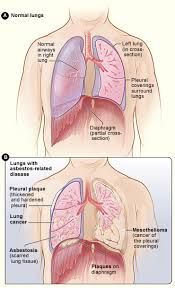 Asbestos is a fiber made from several types of silicate minerals. It has been mined for centuries and prized for its strength and many practical uses, including as an insulator and even a softener in fabrics.

The danger of asbestos was obvious in ancient times; very large numbers of workers in asbestos mines and in industries where asbestos was used developed a lung disease eventually called asbestiosis. In the nineteenth century scientists were able to prove that asbestos caused this disabling -and even deadly- disease. Nevertheless, the concerns were ignored by authorities.

Well into the twentieth century asbestos was used widely in building construction and even in materials such as blankets. The asbestos industry and insurance companies actively suppressed evidence revealing the health risks of asbestos. By the 1980s many advanced nations, with the exception of the United States, began to impose regulations on the asbestos industry to protect workers, and in some cases prohibited asbestos mining. In the United States restrictions were imposed as a result of public pressure by the 1980s. Asbestos is still widely used in many developing economies.