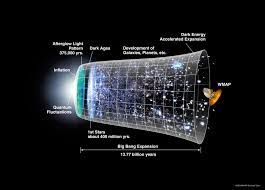 The Big Bang theory explains the origin of the universe as an instantaneous burst from a singularity. Before this concept was introduced most scientists believed the universe had always existed as a "steady state" and would continue forever.

The discovery by Edwin Hubble in 1925 that galaxies were moving away at great speed forced scientists to reconsider the assumption of a steady state universe. An expanding universe implied that there had to have been an abrupt beginning. For many scientists this was uncomfortable: for some it was counter-intuitive and also a contradiction of a centuries-old orthodoxy of thought beginning at least with Aristotle; for others a "beginning" was uncomfortably Biblical.

For physics it was also very difficult to imagine the creation of a universe from nothing. Yet numerous scientists working in cosmology problems kept bumping into the possibility of a sudden beginning of the universe. Equations in Einstein's theory of general relativity suggested an abrupt beginning, but Einstein himself adhered to the steady state idea, defending it until the evidence against it was overwhelming. Fred Hoyle, one of the leading astronomers of the era, ridiculed the idea of a "big bang" in a series of famous BBC radio broadcasts. However, in the 1930s and 1940s evidence of such a beginning accumulated, and major scientists like Einstein had to accept the Big Bang theory. This theory of the beginning of the universe is widely accepted by the scientific community today, but there are still many problems to resolve.