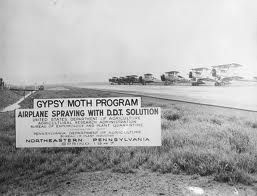 DDT was one of several highly effective insecticides that were sprayed on crops and marsh areas beginning in the early 1940s. It was widely regarded as safe and was hailed as a triumph against malaria-carrying mosquitoes and the many insects that destroyed crops.

The Swiss scientist who created DDT received a Nobel prize for his work in 1948. But by then the dangers of DDT were already apparent. As scientists began to warn about the toxic effect of DDT on animals and humans, there was immediate resistance from agriculture and other sectors that used the insecticide.

For the next twenty years the warnings were largely disregarded, although the damage to wildlife reproduction became increasingly obvious during that time. In 1962 the naturalist Rachel Carson published Silent Spring. More than any other factor, this book aroused public concern and energized a nascent environmental movement in the United States. Concerned scientists and the public demanded that DDT be restricted or banned. But DDT manufacturers went to court to block the threat of a ban, and this action along with other tactics delayed the inevitable ban of DDT in the United States. Other nations banned DDT long before the United States.