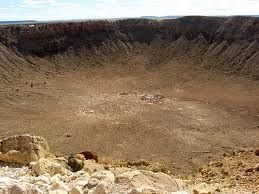 In Arizona, there is an enormous crater, about 15 kilometers wide x 30 kilometers deep (9 miles x 18 miles), according to NASA measurements. This impressive hole is known as the Barringer Crater (a.k.a. Meteor Crater). People today understand that this crater was made by a massive meteorite impact. However, when it was discovered by pioneers in the 19th century no one knew about meteorite impacts of this scale and no meteorite to be seen.

In the late 1890s, an expert from the U.S. Geological Survey, Grove Karl Gilbert, examined the hole and the surrounding area. He analyzed many iron fragments that were left from the meteorite, but scientific knowledge of meteorites was limited at the time and he would not have known that a meteorite might vaporize on impact.

Considering the odd shape of the hole Gilbert thought that an unusual steam-producing volcano had produced the crater. However, that hypothesis did not account for the iron fragments. Gilbert reasoned that iron core of the meteor must have been buried under the crater; in that case it could be dug up or at least detected magnetically. But no such core was found.

About a decade later a well known mining engineer, Daniel Barringer, investigated the crater, motivated by the prospect of finding a huge iron lode at a time when iron was much in demand. The shape of the crater and the abundance of iron fragments in the vicinity convinced Barringer that the crater had been formed by a huge meteorite.

Geologists and engineers in the early twentieth century did not know that massive meteorites could vaporize on impact, so Barringer expected to find the iron remains underground. Barringer was unable to convince geologists that a meteorite had caused the crater, and then when he excavated the crater, there was no iron lode after all, and he lost a great investment of time and money.

It was not until the 1960s, when geologists analyzed silicates at the crater that are produced only in extreme impact conditions, that Barringer's idea was confirmed: the crater had been caused by a massive meteorite. And not geologists were finally able to explain that the meteorite had vaporized.