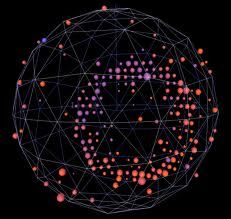 Neutrinos are "ghost particles," so called because they are essentially without mass and they do not interact with matter or gravity. These unique particles are produced in huge numbers during the intense atomic decay process as stars burn through their hydrogen.

The great physicist Wolfgang Pauli was led to the discovery of neutrinos in 1930, not by detection but as a projection from his own equations. At first the concept was very controversial; it was difficult to conceive of a particle that did not interact with matter. However, in the mid-1930s another famous physicist, Enrico Fermi, combined ideas of Pauli and another leading physicist, Werner Heisenberg, to devise a convincing argument for the existence of the neutrino particle.

To his great dismay, Fermi's brilliant paper was quickly rejected by the most prestigious scientific journal, Nature. The editors dismissed the neutrino concept as "too remote from reality," to be of interest. Eventually Fermi published his neutrino paper elsewhere, he refused thereafter to ever submit any paper to Nature. The short-sightedness of the journal in that famous case became a legend in science. It was many years before the neutrino concept was really accepted.