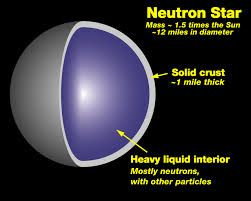 From the mid-twentieth century on, there were many advances in the field of astrophysics. Unexpected discoveries included black holes, various types of dwarf stars and supernovae.

A truly strange phenomenon caused bewilderment in the 1960s. Observers noticed rapidly rotating stars that emitted regular magnetic pulses similar to lighthouse beams. A leading physicist of the time, Thomas Gold, speculated that "neutron" star must be the result of a sudden collapse of a supernova. The mass and pressure of such an extraordinary collapse would compact the neutrons so tightly that a small, remarkable pulsating entity was created.

Despite Gold's prestige, he was not permitted to present his analysis at a major scientific conference; the organizing committee rejected his work as "too outlandish."

It took a considerable time before Gold's theory of neutron stars was accepted. Although not common, a large number of neutron stars have been identified and Gold's explanation of their origins and physical dynamics are fully accepted today.