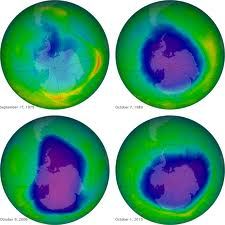 The Earth is protected from the worst effects of the Sun's ultra-violet (UV) rays by a layer of ozone in the upper atmosphere. But chemicals called chloroflurocarbons (CFCs: carbon, chlorine. florine) react with UV and over long periods of time deplete the ozone layer.

When first introduced in World War II, mainly as propellants, CFCs were assumed safe. After the war the use was expanded in aviation, aerosol sprays, refrigerants and solvents.

It was not until the 1970s that warnings were issued by atmospheric chemists. F. Sherwood Rowland, Mario Molino and Paul Crutzen produced evidence showing that the ozone layer was seriously threatened by CFCs. They argued that because the chemical reactions of these products were long-term, the ozone layer would continue to shrink over decades, with serious health and environmental consequences.

There was widespread denial from many quarters, especially from the industries involved in the production of CFCs. Some promoted the mistaken view that the shrinking ozone hole was due to a natural ozone cycle. But as data accumulated and alarms became more global it became impossible to deny the relationship between CFCs and the ozone hole.

Finally, when a very large ozone hole appeared over the Antarctic in the 1980s, there was world-wide concern which forced withdrawal of CFCs. Rowland, Molino and Crutzen were vindicated after a long and disparaging campaign from the CFC industry. They were awarded the 1995 Nobel Prize for chemistry.